The value of an enterprise depends on the innovation of its existing order and process, as well as its ability to constantly create new growth engines. 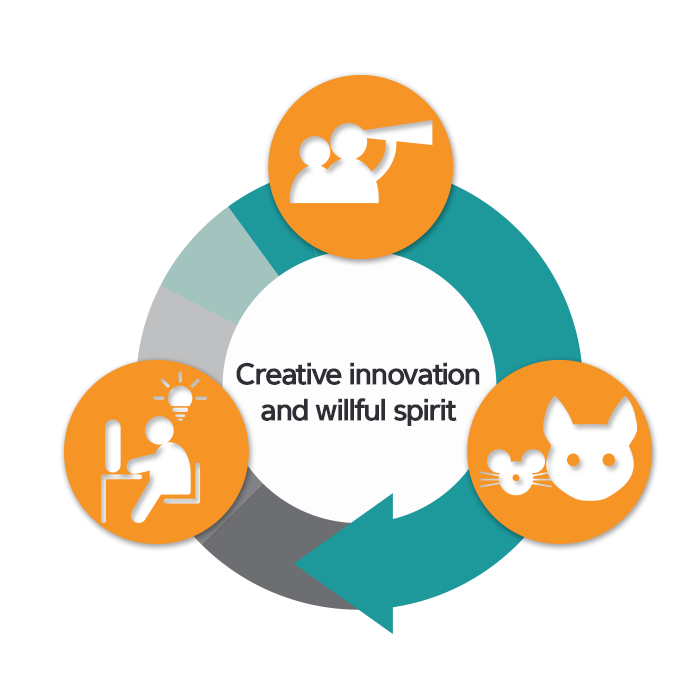 The three biggest innovation activities of the Lix Solution

A movement to establish a 21st-century survival and growth strategy by checking long- and short-term risks and opportunities in advance, through prior insight into the rapidly changing technology and market situations.

A movement to find new business, new products, and new technologies based on the survival and growth strategies established through Forecast 21

A movement to find the causes of waste and inefficiency in order to maximize productivity and profit, as well as come up with ideas for improvement.
In other words, LIX SOULUTION is pursuing a sustainable growth while annually repeating it innovation cycle by reading the future trend in advance through “Forecast 21”, securing a new growth engine through the “Pudream Idea Contest”, and improving the company structure through the “Tom Project”.

These three innovation activities are carried out using the bottom-up method, wherein all employees submit their ideas by voluntarily participating in the movement. The selected ideas will receive a prize based on the grades of their ideas. Furthermore, a 20% maximum incentive of the effect amount will be given for the profit increase and cost reduction effect produced using the relevant ideas.

The fastest way is the Barun Electronics.

Ethical management refers to ‘business ethics’ as a top priority in corporate management and business activities, It is a management spirit that pursues transparent, fair and reasonable business performance. ‘Right growth’ is a valuable achievement and value that has led to 50 years growth of LIX SOULUTION.

The ethical management of the LIX SOULUTION is the standard of action that top management and its members must observe within the organization. Transparent values, fair work execution, reflect the ethical expectations that society demands in the decisions and actions of our company.

We, LIX SOULUTION, receiving the inquiries and reports on violation cases by the company and employees. Your valuable information is handed directly to our top management and treated with care. Right advice for right growth, we will create a proper management culture.

Greetings from the Chairman

“Differentiate rather than Compete”

The world’s most “hot” company, Apple is now approaching a market cap of $ 1 trillion after hitting $ 900 billion. Even selling a country does not make it possible to buy Apple.

Apple’s keyword is ‘differentiation’. It has created its enthusiasts who value its innovative design and sticks to its iOS in the smart device market where Android is dominant. Furthermore, it has built up a massive Apple ecosystem, including its latest release, its Watch Series and artificial intelligence, Siri.

Strategy cannot be excluded from management. The distribution of limited resources is prioritized: setting a clear goal to engage everyone in one target, keeping the organization and business small and sharp through selection and concentration, and dividing markets and customers into the smallest units to focus on a particular unit.

Since LIX SOULUTION was established in 1972 as Korea’s first ICT company, it has grown to be ‘the first in Korea’ and ‘the first in the world’. In the early 1980s, it first localized a modem so that it achieved import substitution effect corresponding to over 500 billion won. In 2005, it entered the 3D industry for the first time in Korea and recorded the second-largest share in the global market in the shortest period of time. In 2010, its market cap exceeded 800 billion won, making it one of the top 10 companies listed on KOSDAQ.

On the other hand, it has suffered numerous fetters and twists and turns as the No. 1 company. The IMF in 1997, the dot-com bubble decay in 2000 and the global financial crisis in 2008 led to its harsh restructuring and became drags on its growth. However, all these difficulties became a strong starting point to further solidify its goals and to newly prepare for the next 50 years.

“Differentiate rather than Compete” is LIX SOULUTION’s new ideal. We LIX SOULUTION will strive to become ‘First mover’ and ‘Last stander’ through our differentiation instead of competition. Born Technology, one of the leaders in the information age, will become a representative company in the era of the fourth industrial revolution